Without a new road layout, traffic through the Broad Street northern junction will become more congested as the town grows. The revised approach, with a large mini-roundabout, improves the function of this junction with current and future traffic flow.

This is demonstrated by traffic modelling based on detailed analysis of existing issues with the Broad Street northern junction and comprehensive traffic assessments undertaken as part of the March Area Transport Study.

The modelling has been carried out using the UK standard, real-time transport modelling software VISSIM, which simulates the effect of the new road layout on traffic flow. 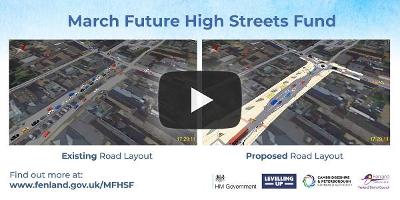 The new scheme shows dramatically improved travel times and a consistent flow of traffic through the town. This not only eases congestion but also reduces pollution from standing vehicles currently found in the town.

The videos are based on real data collected over a period of days and represent an average day - not school holidays, days with planned closures or days that works were taking place. The models outline peak times for the road network, morning and evening.

What to watch out for!

Both models use the same amount of traffic, placed into the system at the same time. Some interesting items to watch for which illustrate the benefits are:

Current traffic signals on Broad Street typically hold traffic for between 48-64 seconds for every 100 second cycle, with two lanes currently required on Broad Street to accommodate queues caused by the signals.

The new Broad Street scheme will improve traffic flow, with reduced delays at all approaches to the junction and less queueing.

The tables below demonstrate the delay at the junction at peak times (8am-9am and 5pm-6pm) with the existing road scheme, in 2018 and as the town grows through to 2031, compared with the reduced delays with the proposed scheme: